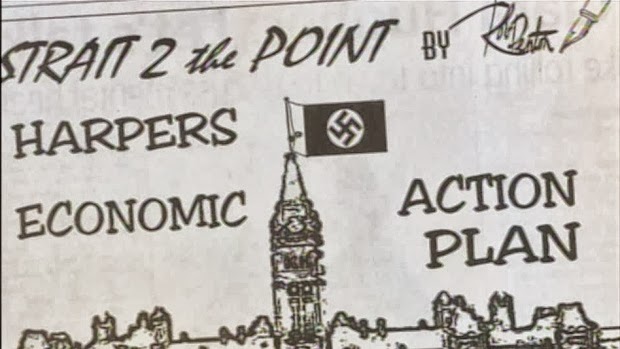 Harper is a horrible prime minister, he does not care about democracy or science. He has tarnished Canada's image on the world stage by promoting the tarsands and by supporting George W. Bush style militarism. Canada was denied a seat on the UN Security Council because of how Harper has damaged the country's international reputation. No longer peacekeepers.

I have no use for Harper, he is a bully with authoritarian tendencies promoting destructive policies, but calling is Nazi is a little too much.

The cartoon (pictured above) appeared in the Pictou Advocate - a weekly Nova Scotia newspaper. It was inappropriate. The overuse of Nazi analogies to slander political opponents - this has been done by the lunatic Tea Party in the United States with Obama - trivializes the horrors of Hitler's regime, the bloodshed of WWII, and the tragedy of the Holocaust.

Please, let's criticize and call out Harper for his abominable government, but do not resort to tactics comparing him or his policies to Nazism, trivializing a 20th century tragedy.

You can read more on this and watch the story from CTV Atlantic here. Recommend this post
Posted by LeDaro at 11:56 am