Sorry about the picture being shaky. Mike Duffy was handling the camera..:)

Recommend this post
Posted by LeDaro at 1:32 pm 0 comments

I wonder what is he doing these days?

Recommend this post
Posted by LeDaro at 4:35 pm 2 comments

Email ThisBlogThis!Share to TwitterShare to FacebookShare to Pinterest
Labels: A lot of free time, Mike Duffy

If you're wondering why I write so much about Nelson Mandela then it is because of my interest and involvement in human rights issues. A fellow prisoner and friend of Mandela was invited here in the Maritimes to speak at a human rights conference. My job was to pick him up from the hotel and bring him to the conference. He was a very humble man. Unfortunately I forgot his name. I asked him all kinds of questions and he told me about Nelson Mandela and how he was an inspiration for fellow prisoners.

Last night I was watching NBC news and it was reported that it was the largest number of world leaders gathered ever anywhere. That tells you how highly he was venerated.

Visit NBCNews.com for breaking news, world news, and news about the economy
Recommend this post
Posted by LeDaro at 12:57 pm 0 comments 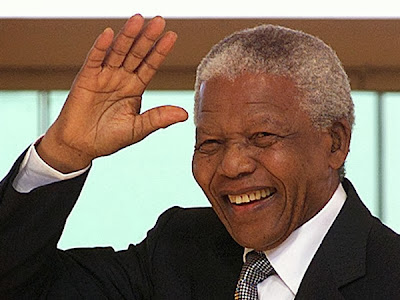 He was 95 and in ill-health, but it is still hard to come to grips with the reality that he is gone. He was a leading figure of our times, a historical figure, a living legend who played a leading role in the fight against the injustice of Apartheid in South Africa.

It has been written a lot on already, but it is worth noting that his emphasis on forgiveness, forgiving those who jailed him for 27 years, is remarkable. He may not have been a saint - by his own admission - but Mandela was a remarkable person, a remarkable leader in the fight against Apartheid whose suffering made him a stronger and better person. Rather than being consumed by rage and a desire for revenge, he emphasized forgiveness and reconciliation. In a continent marked by political turbulence, South Africa - while far from perfect as inequalities persist - stands as an example of a multi-racial democracy.

I read his autobiography - Long Walk to Freedom - it was remarkable.

Mandela will live on in the consciousness of South Africa, and of the world. He is a towering figure. Recommend this post
Posted by LeDaro at 2:09 pm 0 comments

Arnon Milchan was the first one who provided the necessary material to Israel to make its first atomic bomb. Why U.S, Canada and other Europeon nations not go after Arnon Milchan. When it comes to Iran they are all gung ho. Hypocrisy and double-standards.

Recommend this post
Posted by LeDaro at 2:08 pm 0 comments