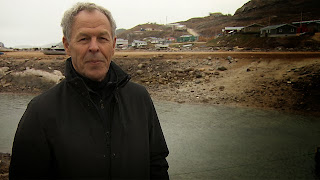 I knew about Harper's war on science but CBC's Fifth Estate documentary, Silence of the Labs, was revealing, showing the full extent of the damage being wrought by the Harper Conservatives. I never thought it was this bad. The damage done is immense, scientists muzzled, world renowned research projects axed, all in the name of politics.

An archeologist leading a team researching Viking landings on Baffin Island - a project that received international media attention - was axed because the Harper CONS wanted to emphasize British history, including the War of 1812, and did not want anything that distracted from that.

Research that reveals inconvenient truths about the oilsands, exposing the ecological destruction they are unleashing, is also being axed. Harper is blatantly acting at the behest of the oil industry.

Harper has made Canada a joke in the scientific community, putting his head in the sand and ignoring facts and reality.

You can find a link to the whole documentary as well as extra clips and documents at this link.

The full version of "Silence of Labs" is also available on YouTube: