Stephen Harper thinks he is a world leader. He has been prominent in criticizing Russia over Ukraine and promised Ukraine some military help. Putin primarily told him to go and 'screw yourself'. 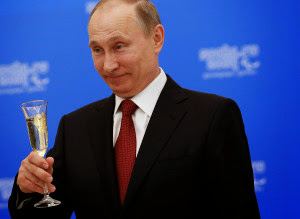 A toast to Stevie

"The Conservative government's tough rhetoric over Russia’s actions in Ukraine may play well to some voters domestically, but analysts doubt it will have any impact on curtailing Moscow's policies in the region.


"I think the only people Putin’s going to pay any attention to, if he pays any attention at all, are going to be the United States and the European Union, above all Germany," said Randall Hansen, director of the University of Toronto's Centre for European, Russian and Eurasian Studies."