This got to be astonishing. Even diplomats cannot deal with Harper. They're diplomats and they're extensively trained how to deal with people of all kinds and cultures. If Harper cannot get along with diplomats then what is left. 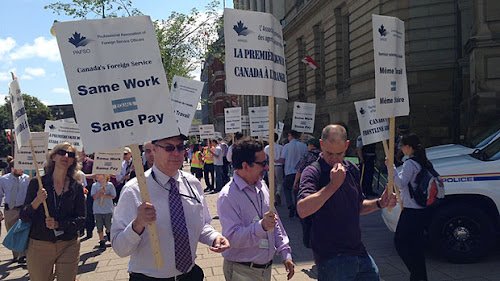 "The Professional Association of Foreign Service Officers (PAFSO) created a picket line outside of the Prime Minister's Office, across the street from Parliament Hill, during lunch hour.

The striking diplomats carried signs that read "Same work equals same pay" and "Canada's Frontline Abroad" while blowing whistles and using other noisemakers. A spokeswoman for Harper would not say whether the prime minister was in his office or not."

This is definitely a new chapter in the Canadian history. If diplomacy does not work with Harper then what will? Please correct me if I am wrong.