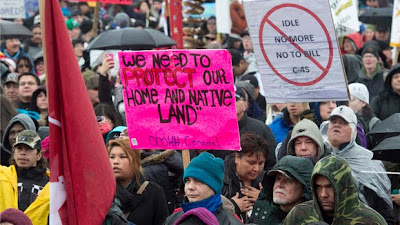 Harper's neglect of First Nations, indifference to them, has come to a head, with the Idle No More protests taking off across the country. The protests are against the poor state of housing on reserves like Attawapiskat whose chief, Theresa Spence, has gone on hunger strike. The protests are also against legislation like Bill C-45 which would replace the Navigable Waters Protection Act with new legislation removing protections against obstructions - such as pipelines and dams - from most lakes and rivers in the country. This no doubt so Harper can appease his friends in the oil industry.

Harper scrapped the Kelowna Accord upon becoming prime minister in 2006, something negotiated over a long period by Prime Minister Martin, provincial governments and First Nations. Kelowna would've done a lot to address poverty in First Nations communities.

Harper took a long time to respond to Spence and then played politics with the location of the meeting and whether the Governor General would be present, this is heartless considering her health and life are at risk. First Nations are divided on the issue of meeting with Harper (on location, on whether the Governor General should be present) - with AFN Chief Shawn Atleo being marginalized by meeting with Harper where many other chiefs refused to.

There is a turbulence in Canada we have not seen, could Harper's regime of heartless neo-conservatism be finally coming apart?