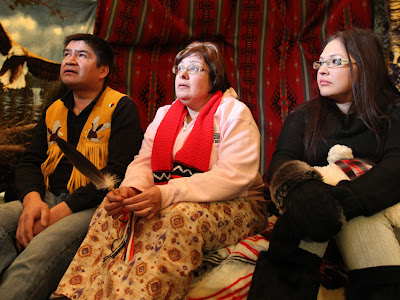 Harper's neglect of First Nations is unbelievable, the way he flippantly dealt with Attawapiskat, auditing rather than seeking to properly deal with the problems of poverty and substandard housing there. He has proposed/passed an array of legislation that tramples on First Nations and treaty rights - including bill C-45 which would allow obstructions of waterways (such as pipelines and dams) with little oversight on a vast range of waterways (lakes and rivers) in Canada.

Harper is using his majority to run roughshod over environmental and First Nations rights. He must be stopped, hopefully Idle No More will do that. Recommend this post
Posted by LeDaro at 12:28 pm