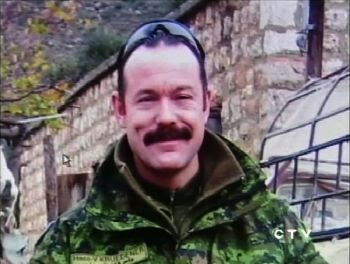 Maj. Paeta Hess-von Kruedener and three other United Nations
observers were killed in 2006 when the Israeli military
targeted their small outpost with repeated artillery barrages
as well as an attack by a fighter aircraft. (Photo: Courtese CTV)

How far is Harper's blind obedience to Netanyahu going to go? He's willing to disregard the life of a Canadian soldier for fear of making Netanyahu mad? Do Canada's interests matter or is our country just a subsidiary of the Israeli rightwing?

Regarding the removal of the report on the killing of a Canadian Maj. Paeta Hess-von Kruedener by Israeli forces, the soldier's widow stated that:


"They don’t want people reading about it. It's embarrassing to the Israelis and, as we know, Prime Minister (Stephen) Harper has given his unconditional support to the Israelis."